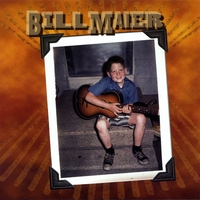 $12.99
A tasty treat as delicious as mom’s hot apple pie. 3 chord country and rock and roll. Pure Americana music, straight from the heart. New country with a rock edge. Tim McGraw, John Mellencamp, The Rolling Stones, Tom Petty and Jackson Browne all mixed up into one.
Born and raised in Hicksville, New York, and currently making his home just south of Nashville, Tennessee, Bill Maier has gained a large loyal following on the strength of his award winning songs, stellar musicianship and distinguished vocal delivery, becoming one of country music’s hottest and most respected singer/ songwriters. Listening to Maier sing his songs is like listening to country radio of the future. His songs sound like hits, and in the hands of the right artists are destined to be just that.For years a dynamic performer on the New York music scene, Bill Maier’s talents as a songwriter and singer earned him the respect of his musical peers, and rave reviews in local and national publications. Performing Songwriter Magazine said, “Maier writes lyrics that touch the heart, and melodies that stay in your head.” Newsday’s Nightbeat called him “a songwriting sharpshooter …one of New York’s best kept musical secrets.” Time Out New York Magazine proclaimed, “The soft croon of Ten Gallon Fat’s Bill Maier is reminiscent of David Wilcox or the homesick urban folk of Catie Curtis…”Maier’s reputation is spreading from New York to Nashville. His song, Little Tin Can, was judged among the top songs (out of 5000 entries) in a recent CMT/Nashville Songwriters Association’s Songwriting Contest . Regular appearances at the world famous Bluebird Café, Tootsies Orchid Lounge, Douglas Corner Café and other Nashville mainstays have brought him a legion of new fans, the attention of a few major music publishers, and the opportunity to perform in-the-round with an A-list of Nashville hit writers, including Bob DiPiero, Deborah Allen, Pam Belford, Alex Call, and Stewart Harris and many others.

Maier’s songs have been covered by a wide variety of artists; from indie country crooners like JR and The Roadkill Choir, Brad Conner and Longshot, and Brooks Tucker, to adult contemporary artist Charles Langley, and 50’s Doo-Wop stars Randy and The Rainbows. His songs have been featured in Tommy Hilfiger stores nationwide, and have been featured in indie film and on numerous commercial and internet radio shows. Expect to hear some major label country artists singing some of Maier’s songs soon now that publishers are plugging his songs on Nashville’s famed Music Row.

But you don’t have to wait for that. You can hear Maier’s songs sung by the man who wrote them on his self-titled debut cd. Pick up your copy today. You won’t be sorry you did.


Warning: sizeof(): Parameter must be an array or an object that implements Countable in /nfs/c08/h02/mnt/117827/domains/tengallonfat.com/html/wp-content/themes/lush/woocommerce/single-product/meta.php on line 15

There are no reviews yet.

Be the first to review “Bill Maier CD” Cancel reply