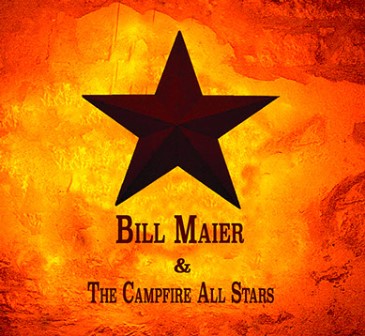 Loading tracks...
Update Required To play the media you will need to either update your browser to a recent version or update your Flash plugin.

The latest release from Nashville singer/songwriter, Bill Maier (with The Campfire All Stars) is a return to roots tour de force… Twenty years after releasing their first critically acclaimed cd, and 10 years after moving to Nashville to pursue country cuts, Maier returned home to his New York stomping grounds, and gathered his long time bandmates, Joe Leonard, Chris Jordan, Willie Marin, Don Meehan, and Brian Walsh into the same Long Island studio where they had recorded their first album twenty years previously, and the results are impressive.

Wearing their influences on their collective sleeve, you can hear the wide variety of their palette, from the classic rock sounds of The Heartbreakers, Allmans, and Springsteen on songs like Last Song, In The Front Door, and Don’t Give Up On Me Yet, to the country and southern rock influences of The Eagles, The Mavericks, and Skynyrd on Break My Heart and other cuts. Let Me Know, and Girl With A Gun have a more mainstream country edge along the lines of Keith Urban, or Jason Aldean, but Maier and The Campfire All Stars somehow meld all those influences into a sound all their own.

Recorded through a vintage Neve mixing board at Sabella Studios in Roslyn Heights NY, and mixed by Kenny Gioia (Marcy Playground, Leann Womack, Mandy Moore) the cd sounds as good as the songs are strong. From the down home rootsy feel of Stompin that kicks off the album, to the nearly 3-minute instrumental reprise at the end of Don’t Give Up On Me Yet thirteen songs later, Maier & the All Stars never disappoint.

While today this CD might best be categorized as Americana, this record harkens back to the golden age of country rock where acts like The Eagles, Linda Ronstadt and Jackson Browne ruled the airwaves. Sprinkle in a little more modern edge, and some really great songwriting from Maier and a few of his Nashville co-writers and you’ve got a recipe for success.